Kefir is a traditional fermented milk product that had its origins in the north Caucasus Mountains between Russia and Georgia 2,000 years ago. Kefir is a viscous, slightly carbonated, dairy beverage made from the action of various bacteria and yeasts contained in kefir grains on cow, goat, or sheep milk. 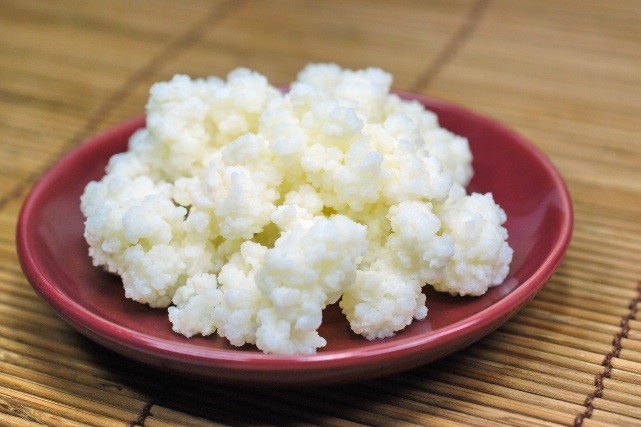 The name kefir is thought to originate from the Turkish word kefy or keif meaning happiness and satisfaction.

Kefir grains are not like real grains. Instead they comprise various species of lactic acid bacteria, acetic acid bacteria, yeasts, and moulds which grow and develop a complex symbiotic relationship in a matrix of protein and polysaccharides. Recent studies show that more than 50 microbial species may be involved in kefir grains.

The grains are white, irregular masses, 1-3 cm in length, that have a slimy but firm granular structure which resembles cauliflower florets. The complex physical and biological structure of the grains is not well studied or understood.

Kefir is made by inoculating milk with kefir grains, incubating the milk for 10–12 hours at 19–22°C, until the pH reaches around 4.6–4.7, then cooling to 9°C and ripening for 1–3 days before chilling and dispatch. The grains are strained from the final product.

During fermentation, the organisms in the grains produce lactic acid, as well as significant amounts of carbon dioxide, variable quantities of alcohol, and other organic compounds such as peptides and polysaccharides. These organisms also produce an array of aromatic compounds which give kefir its unique flavour and aroma.

While the market for kefir in Australia is quite small, there continues to be great interest in this product and this will only increase as we better understand its probiotic properties.