Yoghurt, yogurt, or yoghourt is a food produced by the bacterial fermentation of milk. In fact yoghurt is one of the oldest and most popular fermented foods across the planet.

Consumption of yoghurt in Australia has grown significantly over the past decade, and is considered to be a healthy snack for consumers. Australians consume around 7.5 kilograms of yoghurt per year.

Yoghurt is prepared by heating milk to around 85°C which creates a better texture in the final product. The milk is then cooled before adding two specific starter cultures to ferment the milk. 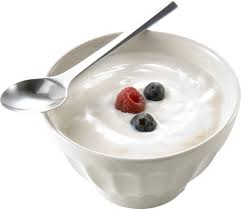 The Streptococcus thermophilus bacterium goes into action first producing lactic acid and preparing the conditions which allow the Lactobacillus bulgaricus to start multiplying and turns the milk into yoghurt. During the fermentation the milk thickens and develops its distinctive sour taste. The lactic acid produced during the fermentation process acts as a preservative and extends the shelf-life of the yoghurt.

While cow's milk is commonly used to make yoghurt, milk from goats, sheep, mares, water buffalo, camels, and yaks is used to produce yoghurt in various parts of the world.

To offset its natural sourness, yoghurt is often sweetened, or flavoured with fruit purees or jam. Sugar or other sweeteners (including artificial sweeteners) are also added to commercial yoghurts. Some yoghurts may also contain added starch, pectin (found naturally in fruit), and/or gelatin which is added during production in order to enhance the thickness and creaminess of the product.

Set yoghurt: the mixture of milk ad starter culture is poured into containers and incubated without any further stirring. The milk sets and has a characteristic thick texture.

Stirred yoghurt: the mixture of milk and starter culture is incubated in a large vat, and continuously stirred to create a creamy texture. Fruit purees and other flavourings are often added to stirred yoghurts.

Greek yoghurt: a thicker type of yoghurt that is made by straining whey from the yoghurt curd to give it a thicker and creamier consistency and a distinctive tangy taste.